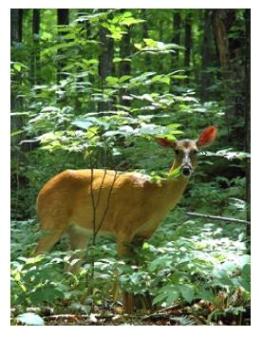 According to the Hinterland Who's Who, the White Tailed Deer is the most widespread and most numerous of all North America’s large animals and according to my son-in-law, Dave, the intrepid hunter, it is not an endangered species.

In Southern Ontario there are so many deer that there are collisions between cars and deer almost daily.

The female often leaves her fawn unattended for hours at a time while she searches for food.

In Southwestern Ontario, and across the province, the White Tailed Deer is easy to identify as it is the only large native deer in the area.

This graceful white-tailed deer Odocoileus virginianus is well known to most North Americans and is easily recognized.

We get many deer on our property, this year there has been a small group of four animals which have visited us most evenings.

Although I very much enjoy watching the deer from our deck, and we don't allow hunting on our property, I do enjoy a nice dinner of venison when our son-in-law invites us for dinner!

Hunters and non-hunters alike recognize the animal by its habit of flipping its tail over its back when it is startled, revealing the white underside and white buttocks. 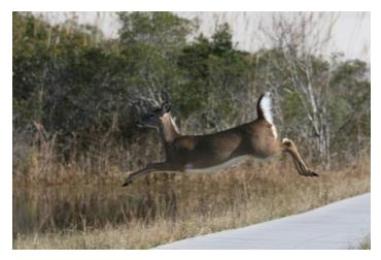 This "flag" of the white-tailed deer is often glimpsed as the high spirited animal dashes away from people.

The tail has a broad base and is almost a foot long. When lowered, it is brown with a white fringe. 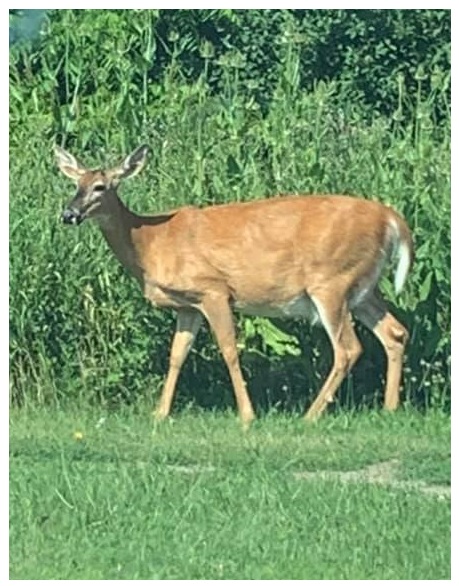 Male Deer can grow to a height of 1 meter at the shoulder and can weigh around 110 kg when full grown and occasionally weigh up to 200 kg in the northern part of their range.

In the summer time there is abundant food which makes almost any forested or bushy area suitable for deer.

In the winter and the snow deepens, the deer concentrate in "deer yards," or areas that provide food and shelter from storms and deep snow - we often see up to 15 deer on our lawn, resting in the snow.

Occasionally the move from summer to winter range requires many kilometres travel.

The male deer occasionally get their antlers hopelessly entangled with those of another male during a mating season battle, resulting in the slow death of both animals when they starve to death.

Sometimes the deer may have difficulty surviving the winter, particularly if there are too many deer competing for food or if the snow is deep. 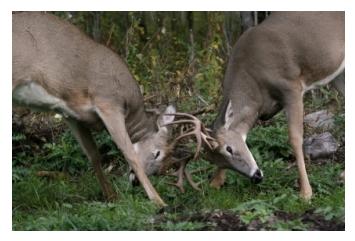 Human activities, such as the cutting and burning of blocks of forests, the seeding of agricultural crops, the winter feeding of cattle, the reduction of competitors such as mule deer, elk, moose, and bison, and the restriction on hunting of white-tails have helped this deer to extend its range northward and westward.

In addition the long-term easing of the severity of winters may have been an important factor.

Whatever the exact combination of causes, the range of the white-tailed deer extended considerably during the late 19th and the first half of the 20th centuries. 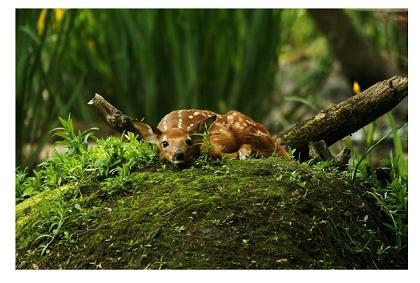 Fawn on a Muskrat Lodge, by Aaron Blanshard, Photographer

Extension of range and development of substantial populations have been somewhat more recent in Saskatchewan, Alberta, and British Columbia than elsewhere in Canada.

Thus, the current range of most white-tailed deer in Canada represents a marked recent extension of northern limits.

It is not surprising, therefore, that when we experience severe winters and there is a change in the habitat of the deer, due to human encroachment, this causes declines in the populations through-out much of their Canadian range.

Do you have a sighting of White Tailed Deer to report?

We'd love to hear about your White Tail Tales! Share with our readers .....

I see many of them in my yard every day, they just look at us as we leave our house ... staring at us. Sometimes the Momma deer will stamp her hooves …

Here are some pictures of White Tailed Deer I took recently in London, Ontario. Aaron Blanshard - Wildlife Photographer Thank you so much for …

Deer Along the Trails

I like to walk the trails along the Grand River in Brantford, and I saw these deer in an open area beside the trail. Thank you so much for the picture …

Deer in St Thomas Not rated yet
We were driving up First Avenue, close to the Canadian Tire store, and we were stopped and had to wait for a train to pass. As we were waiting we noticed …

Photographer needs help! Not rated yet
Kevin, one of our readers, recently asked if anyone knew a good place near Barrie, Ontario, where photographs of White Tailed Deer could be taken. If …

Deer Everywhere Not rated yet
We have lived in our home outside St Thomas, Ontario, for 25 years and when we first moved there we would see deer occasionally, but over the years we …

Deer beside my house! Not rated yet
A few weeks ago I was working at the computer and my daughter said "Mom, look outside, there are deer in the back-yard". Sure enough, there were three …

Hinterland Who's Who - White Tailed Deer
Lots of information about the habits, feeding and habitat of the deer