Alma College the private Girls Boarding School, at the corner of Moore and McIntyre Streets, in St Thomas, Ontario, opened its doors to young women in 1881 and finally closed in 1988. 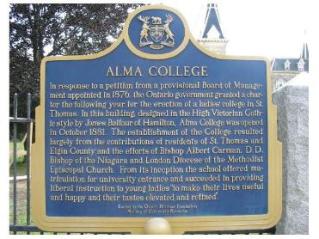 The people of St Thomas grieved the loss of this beloved landmark when it was burnt to the ground in May 2008.

During the late 1800's St Thomas was booming, mainly due to the railroads which came through the city and the increased economy that they brought to the citizens.

At that time, Bishop Albert Carmen proposed that a Ladies College be established here.

The name of the school honours the late Mrs. J.D. (Alma) Munroe Duffield, wife of the then Sheriff, Collin Munroe.

Alma college was officially opened in 1881 as a Liberal Arts College for young women, offering instruction in Literature, Arts and Music, and who's goal was to "promote the spiritual and educational growth and development of young women from around the globe"

According to Wikipedia, the school's traditional colors were chosen based on each of these subjects: blue representing Literature, gold representing Art, and crimson representing Music. 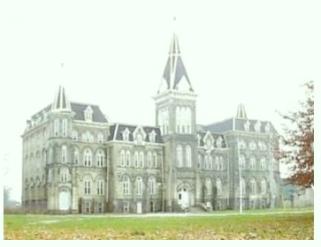 The building was designed by Hamilton architect James Balfour and construction was done by the company of Henry Lindop of St Thomas - with an estimated cost of about $50,000 which would have been a fortune then!

The grounds of Alma College included the main building, the Chapel, an Assembly Hall/Gymnasium, and a unique outdoor Amphitheater.

In later years, the College was affiliated with the University of Western Ontario , London, and was the first college in Canada to organize a department of Domestic Science.

In the years between 1918 & 1953, new athletic facilities were built along with the Chapel and the Amphitheater.

In 1959 a Music building was built, but by 1973 the school had begun to experience a serious financial struggle to continue operation.

In 1975 a portion of the residence was opened as a satellite Home for area Seniors as a local long term care facility and during the same year, a co-educational Elementary School was established here. 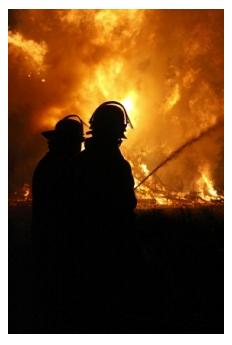 To celebrate the Centennial of the College, in October 1976 it was designated a Provincial Historic Site.

By 1987 the teachers at Alma College faced job security issues, as they were earning only half of the amount that public high school teachers were earning.

The college closed its doors in 1988, partly due to a teacher's strike, however, Primary and music classes were still taught on campus until 1994.

In its day, Alma College had students from as far away as Australia, India, Hong Kong, Mexico, Japan and the Caribbean, many of whose parents were Diplomats.

Following its closure, as it stood empty, the school building was used as a set for several movie productions, including "Silent Hill" (interior shots), its image was used in the 2009 film "Orphan" and the 1997 made-for-TV movie, "Mr. Headmistress"

It was a sad day in St Thomas when this magnificent building was destroyed by a fire on May 28, 2008.

Two local youths, aged 15 and 16 were charged with arson.