THE SQUIRREL
in Southern Ontario 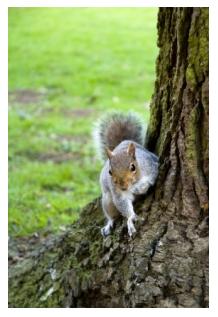 The North American Grey squirrel is native to this area of Southern Ontario and these animals occur in grey or black, and sometimes their fur has a reddish tinge.

Its belly is often white and it has a large bushy tail.

Particularly in urban areas where the risk of predation is reduced, both white and black coloured varieties are quite often found.

The black variety is predominant in certain geographic areas, such as in large parts of southeastern Canada and in this area of Southern Ontario, black and grey types seem to occur in equal numbers.

Click here for information on the smaller, Flying Squirrels of Southern Ontario.

These rodents are omnivores as they will eat anything they find, including seeds, berries, nuts and pine cones. Sometimes they eat bird's eggs and insects too.

Gray squirrels are notorious for digging bulbs from gardens and we have lost many spring bulbs to squirrels - for years we had blamed rabbits, but we have now seen the real culprits in action!

They store food in the Fall, to eat in the winter. Like many members of the family Sciuridae, the Eastern Gray is a scatter-hoarder; it stores food in numerous small caches for later recovery. 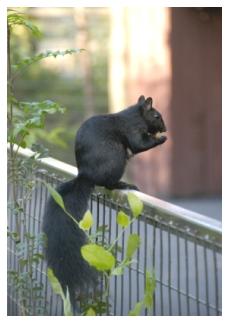 Some caches are quite temporary, especially those made near the site of a sudden abundance of food which can be retrieved within hours or days for re-burial in a more secure site.

Other hiding places are more permanent and the food may not be retrieved until months after being hidden.

It has been estimated that each animal can make thousands of caches each season.

These little fellas seem to have a very accurate memory for the locations of these caches, and are said to use distant and nearby landmarks to retrieve them.

At our house during the Autumn we have found walnuts hidden in very strange places, such as jammed behind our car bumper, up against the screen of an open window, and buried in the soil in our hanging flower baskets!

On occasion, an individual may have a short tail after losing part of its tail while escaping a predator. 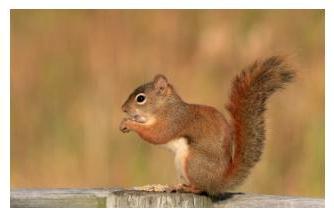 Their diet is specialized as they mainly eat the seeds of conifer cones, therefore, they are widely distributed across North America wherever conifers are common, except on the Pacific coast.

As they mate during the winter, in February and March, and in June and July in summer, the females may become pregnant up to twice a year and after a gestation period of around 39 days 4-6 young are born.

The mother takes care of the young ones, which are born completely helpless as they are deaf and blind during the first few weeks of their life.

In the wild, squirrels have a life expectancy of about 3 years, although, in captivity, they have been observed to live for up to 10 years.

Gray squirrels build a type of nest, known as a drey, often in the forks of trees. The drey consists mainly of dry leaves and twigs.

They may also build a nest in the attic or in the exterior walls of a house which makes them unpopular with home-owners!

Notorious for raiding bird feeders, these critters like millet and sunflower seeds, but if you don't want to encourage them at your bird-feeder, you could try safflower seeds as they are reported to dislike the slight capsaicin.

There are some so-called anti-squirrel birdseed preparations available. In these bird-seed mixes the seeds are coated with chili pepper - the birds are unaffected because they cannot taste the capsaicin, but the taste makes the squirrels stay away, however, this can also cause pain and discomfort to the eyes of the squirrels, so we have chosen never to use those type of seeds.

Hinterland Who's Who - The Eastern Grey Squirrel
Lots of information on "l'écureuil" from the leading Canadian authority! 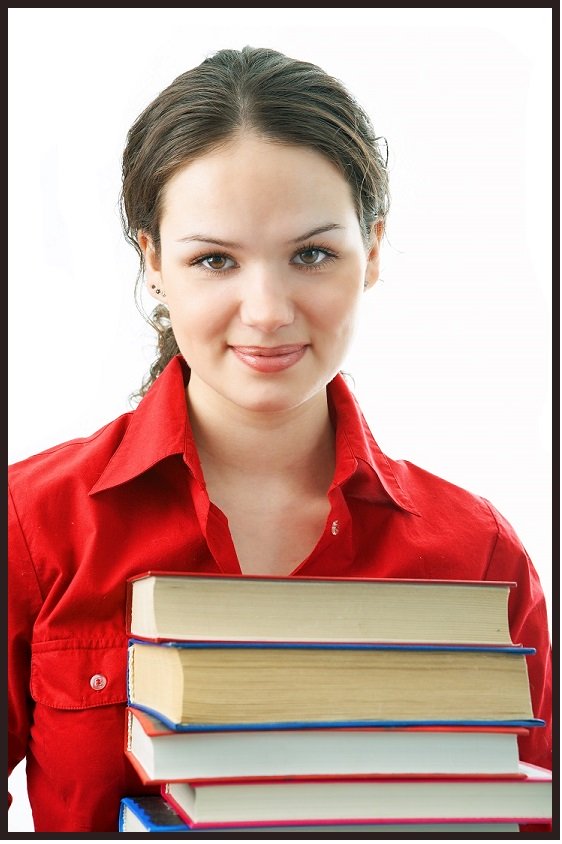