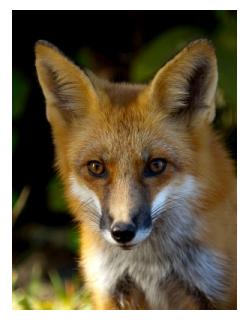 The elusive Red Fox is often sighted at dawn and dusk, as we catch a glimpse of him going about his hunting business.

In Children's story books, foxes are often seen as cunning and sly, but in reality we know that they are shy, quite nervous and appear to be highly intelligent, but secretive.

- that tells the tale of an injured fox and its relationship with a caring human.

According to the "Hinterland Who's Who" the Red Fox has a sharp pointed face and ears and is a small dog-like mammal.

Males are a little larger than the females and both have a big bushy tail and long, lustrous fur.

Red Fox is the common name for these animals however, not all of them are actually red, as there are several colour combinations seen.

The most common colour is deep red, but lighter and darker animals are often seen, with some being brown and there are almost Black Foxes. 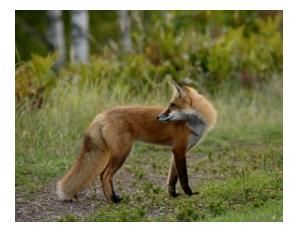 Some individuals have black paws, black behind their ears, white throat or undersides.

Sometimes a white-tipped tail and white stockings are seen.

With each pair hunting in a 4 -8 square mile area around their den, foxes may range far from home for several days to find food.

It was once thought that Foxes in Europe, Asia and in North America belonged to different species, however, we now know that they belong to the same species - Vulpes Vulpes, and are Canidae, or members of the dog family, which includes the Grey Wolf, domestic dogs and Coyotes .

Foxes are widespread across Southern Ontario and throughout all the provinces and territories of Canada. Experts believe that there are now more of these animals in North America than there were when the first Europeans arrived here in the 1500's. 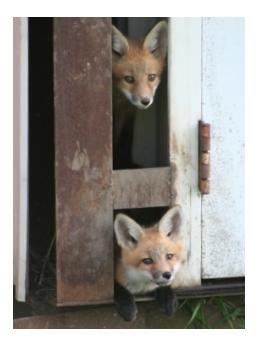 This is thought to be because as the pioneers spread throughout the land they cleared farms from forests and therefore the number of native Wolves was reduced, opening up range for foxes to live with out predation by wolves.

Red Foxes hunt by sight and smell and they are known to eat many small mammals such as voles & mice, lemmings, squirrels, hares & rabbits, reptiles, but they also eat plants and fruits of all sorts.

Their diet often changes with each season - for example in Autumn and Winter there may be an abundance of small animals on their menu, but in Spring when there are eggs and chicks of waterfowl available, they feast on those.

They are known to bury or hide surplus food for later use, but other animals often find and use it before they can retrieve it. When I used to think of Foxes, I thought of them as chicken thieves, and I know they will raid poultry yards when it is safe and easy to do so.

In farming areas, however, they compensate for the odd chicken by eating vast numbers of crop-destroying mammals and insects, and they are now usually appreciated by farmers. They are most actively hunting in the evening, during the night and in the early morning. 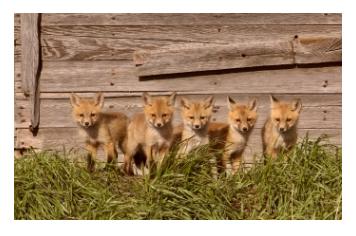 Males are known as "Dogs" and females as "Vixens" and usually, but not always, have only one mate.

Their young are called "Cubs" or "Kits".

Foxes breed between late December and mid-March with cubs being born in between March and May after 51 - 53 days gestation.

Litters average 5 cubs, but can be more or less than that number.

After breeding, the foxes seek a suitable den, which can be an old groundhog burrow, but may also be the burrow of another animal, a small cave, hollow log, a patch of dense bush, or a hole under a barn or other structure.

Fox dens often have more than one entrance, to allow the animals to escape from danger and are often south-facing for warmth. Good visibility from the main entrance is desirable for the animals, and are usually dug in dry, sandy soil.

A good, secluded den may be used by foxes for many years.

Thanks to Dreamstime for the picture of mother and daughter reading  8273185© Lanak| Dreamstime.com

Hinterland Who's Who - The Red Fox
Comprehensive information about our native Foxes, their habitat and breeding 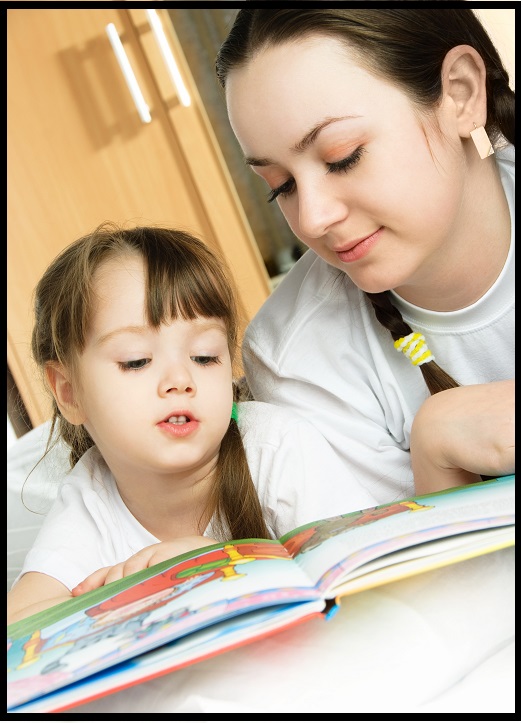