THE FLYING SQUIRREL
in Southern Ontario 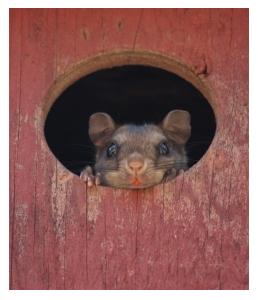 The Southern Flying Squirrel, or l'écureuil volant, is one of two species of the genus Glaucomys, found in North America (the other is the somewhat larger Northern type, Glaucomys sabrinus).

It is found in deciduous and mixed woods in the eastern half of North America, from southeastern Canada, to Florida, USA.

I recently heard that Springwater Conservation Area between St Thomas and Aylmer, is home to Flying Squirrels.

These elusive little fellas have grey-brown fur on top with darker flanks, and are a cream color underneath. They have large dark eyes and a flattened tail.

After living in St Thomas for over 40 years, I finally spotted a Flying Squirrel, but sadly, it was one that my cats had caught and killed.

They have a furry membrane called a patagium which extends between the front and rear legs, used to glide through the air.

The Southern Flying Squirrel feeds on fruit and nuts from trees such as the red and white oak, hickory and beech trees, and they also dine on insects, buds, mushrooms, fungi such as truffles, carrion, bird eggs and nestlings and flowers.

They store their food, especially acorns, for winter consumption.

Predators of these little animals include snakes, Owls, Hawks and Raccoons, domestic house cats can also be dangerous to these animals.

Although graceful in flight, they are particularly vulnerable on the ground.

These creatures will make outside nests, especially in pine woods, but they prefer to nest in holes in dead trees. 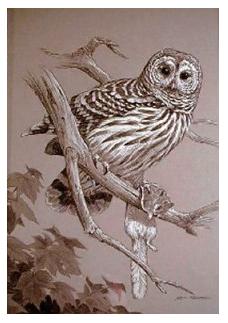 They often use these nesting holes communally, especially in winter, when huddling together for warmth gives them significant energy savings.

They readily use artificial nesting boxes and they choose holes with smaller entrances than those used by the Gray Squirrel (Sciurus carolinensis).

Both in the wild and in captivity, they can produce two litters of young each year (with 2-7 young per litter), in early spring and mid-summer.

The gestation period is approximately 40 days and the babies are born without fur and are incapable of taking care of themselves. Their ears open at 2 to 6 days old, and fur grows in by 7 days, but their eyes don't open until they are 24-30 days old.

Parents leave their young 65 days after they are born and the young then become fully independent at 120 days of age.

The Southern species show substantial homing abilities, and can return to their nests if removed to distances of up to a kilometre. 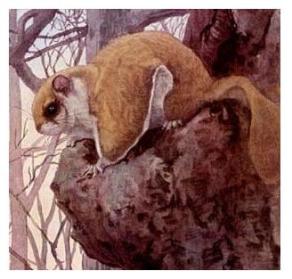 Their home ranges may be up to 40,000 square metres for females and double that for males, tending to be larger at the northern extreme of their range.

The term "flying" is misleading, since flying squirrels are actually gliders and are incapable of true flight.

Steering is accomplished by adjusting tautness of the patagium, largely controlled by a small cartilaginous wrist bone.

The tail acts as a stabilizer in flight, much like the tail of a kite, and as an airfoil when "braking" prior to landing on a tree trunk. 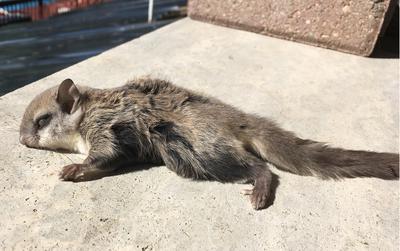 Though their life expectancy is only about six years in the wild, they often live between 10 and 15 years in captivity.

This difference is due to these creatures being important prey animals, as predation mortality rates in the young are very high.

I have lived in the St Thomas, Ontario, area for over 35 years and had never seen a Flying Squirrel until I found this one, which our cats had caught and killed - I didn't even know that they lived around here!

Thanks to Dreamstime for the picture of girl in red dress  3199403© Photoeuphoria| Dreamstime.com