The Peregrine Falcon is a bird of prey which is widespread across north America, and this bird is famous for it's speed, which can reach over 200 miles per hour (320 km  per hour) during it's downward swoop for prey. 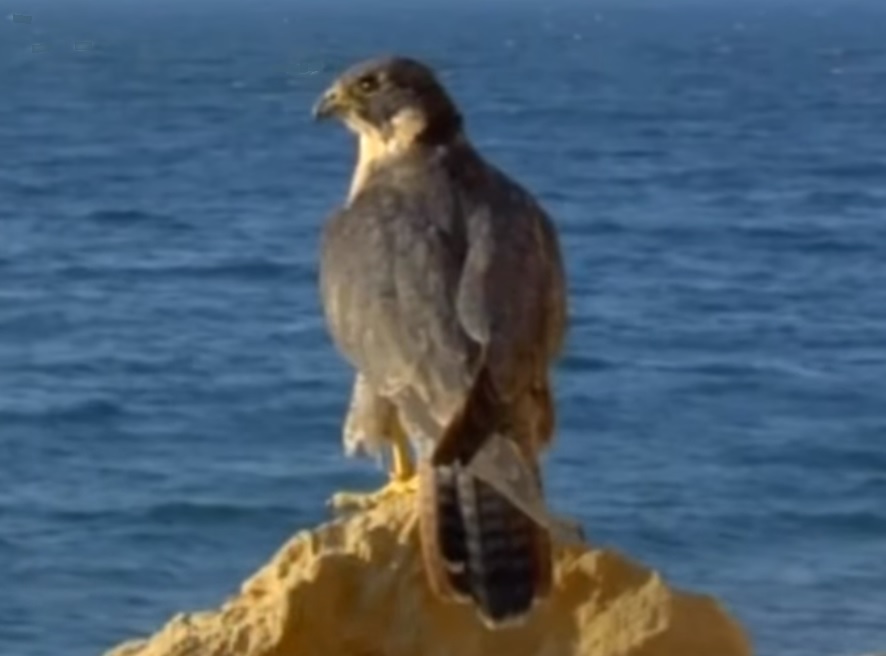 This makes this bird the fastest bird in the world, as well as the fastest animal on Earth!

As in other raptors, the adult female is bigger than the male.

The Peregrine's range extends from the Arctic to the Tropics, and that includes Southern Ontario, where they are found in towns and cities where they take advantage of tall buildings such as apartment blocks to build their nests.

From their high vantage point they can often catch an unaware pigeon of duck.

Around the world these birds are used in Falconry and are trained to hunt small game. 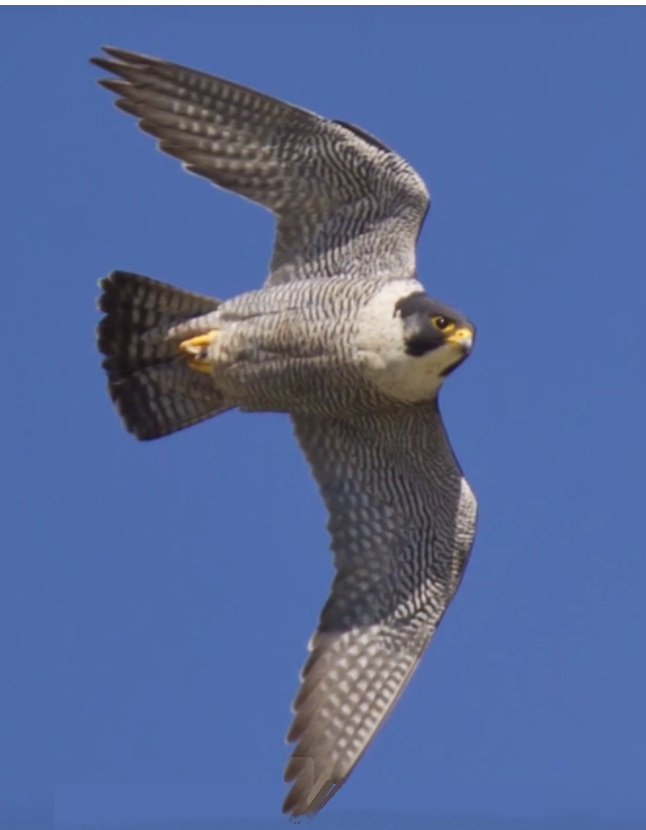 Their diet is almost totally smaller birds, such as pigeons and song birds, they will also hunt and catch small mammals and occasionally small reptiles, and they are also known to prey upon smaller hawks and owls.

They reach maturity at one year of age.

During the years that DDT was used as a pesticide, the Peregrine Falcon, along with other animals, suffered a massive drop in numbers, but thankfully, since DDT was banned in the 1970s, their numbers have recovered, encouraged by protection of their breeding areas and nesting places, as well as breeding programs which enabled authorities to release captive-bred birds into the wild.

As well as living in urban centres, this falcon lives along river valleys, coastlines and mountain ranges and in areas with mild winters, they do not typically migrate south for the winter.

Here in Southern Ontario, they usually fly south to warmer areas such as South America for the winter months, after breeding farther north. 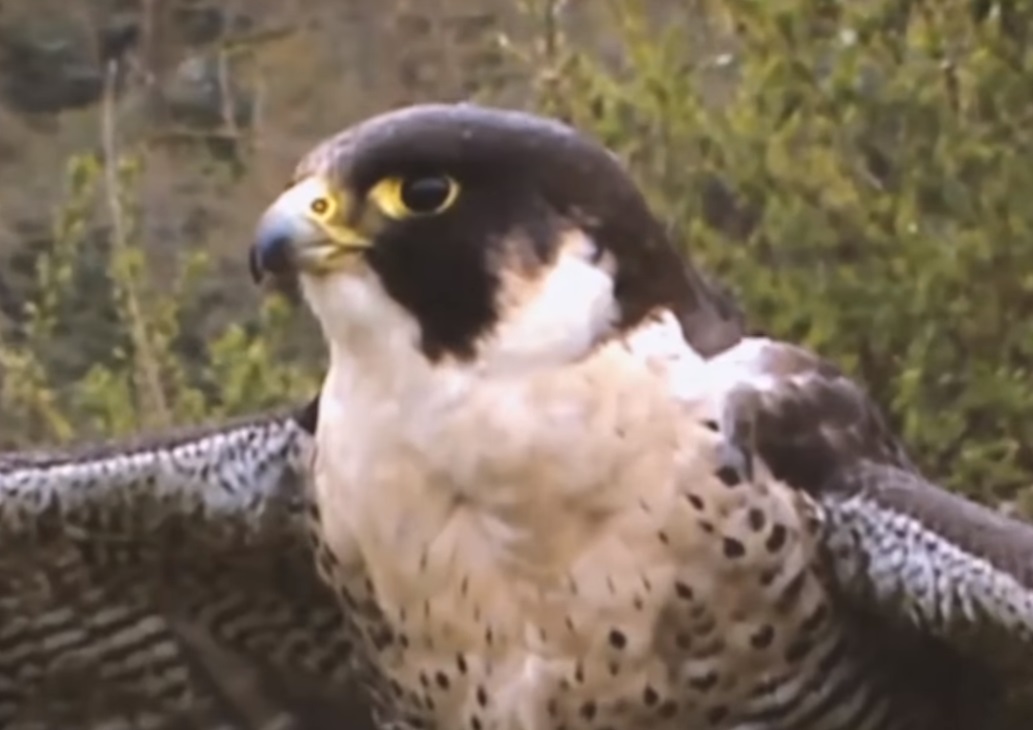 I recently watched a video which showed the breath-taking speeds that these raptors reach as they hurtle toward their prey close to ground level and how they have developed physical parts, absent in other birds, such as a bony nasal tubercle in their nostrils, to prevent the dangerously high speeds from damaging the bird's lungs.

In addition, the falcons use their third eyelid, or nictitating membrane, to spread tears and clear debris from they eyes as they dive. How amazing!

Believe it or not, in the wild, Peregrine Falcons can live up to 19 years of age.

Hunting most often takes place in the early morning and late evening when they prey are active.

I have observed a Peregrine Falcon descend upon an unwary pigeon, from a great height, and knock it unconscious with the speed and strength of it's 200 mph downward flight.  Within moments, the hungry falcon was eating it's victim.

They are attracted, and successfully hunt, where large groups of birds meet during migrations, such as flocks of shorebirds.

Thanks to Dreamstime for the use of the picture of two girls with books  8417282© Monika Wisniewska| Dreamstime.com 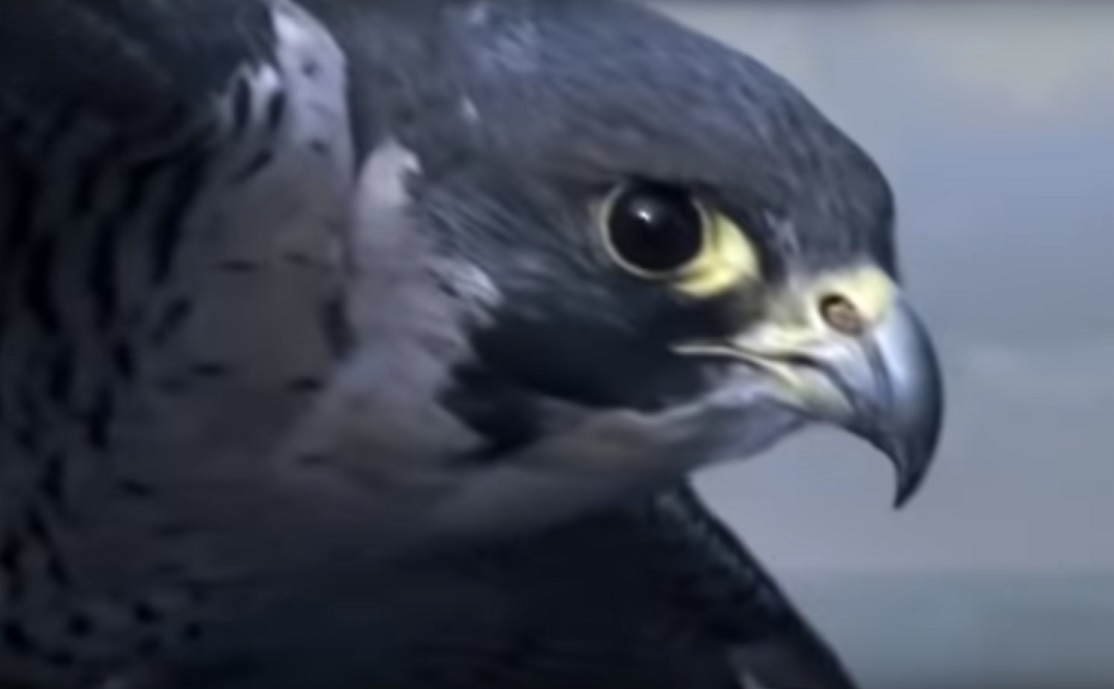 Peregrine Falcon - All About Birds

Do you have a great story about Peregrine Falcons in your area?

Have you seen a Peregrine Falcon in Southern Ontario? We'd love to hear about it!

Lee had the pleasure of witnessing this healthy specimen this morning. My son and I were both in awe of its beauty.

Seen July 6 around Yonge and Bloor in Toronto adjacent to the Rosedale Valley ravine. It was calling frequently, a high pitched soft sound, not harsh. …

I spotted this bird in Elliot Lake. Can anyone identify? Thanks for sending us this great picture and I'm sure one of our readers will be able …

I noticed this bird of prey on our hay bales - I got as close as I could and using my zoom lens snapped these shots. If someone knows what this is …

We live over on Huron and Barker Street in a crescent across from a French High School. The past 4 days we have seen 2 Peregrine Falcons with a nest …

I have been watching raptors nesting over the east facing penthouse at 9 George St Brampton ... can anyone confirm if they are Falcons? I have tried …

I have been watching these Falcons for weeks. I am almost positive they are Falcons. Today I saw a third with the pair. I am certain it is their …

There are several pairs of Peregrine Falcons based around Fanshawe College, just a short distance from our house. Occasionally, I've seen them in one …

Peregrine Falcon at Dofasco Not rated yet
I was sitting outside where I work at Dofasco in Hamilton at about 10 am. All of a sudden a group of pigeons scattered and a large greyish white raptor …

Perigrine Falcon in Missisauga Not rated yet
A Peregrine Falcon was sighted today in west Mississauga (Winston Churchill Blvd south of the 403) at 3pm on Monday June 16/14. The bird was sighted …

Peregrine juvenile spotted in Richmond Hill, Ontario Not rated yet
I was making myself a tea, standing at my kitchen window this afternoon, watching the flurry of activity at our bird feeders. All of a sudden, all …

Juvenile Male Falcon Not rated yet
This juvenile male Falcon was born under the Ambassador Bridge in Windsor Ontario. He and his sister floated to the ground several weeks ago. The …