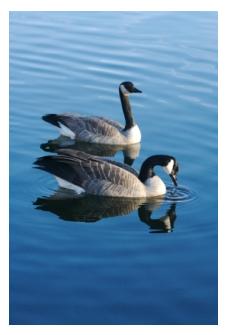 The Canada Goose is probably instantly recognizable by most people, with its black head, long neck and white cheek patches, and it is abundant here in Southern Ontario and around the rest of Canada.

It is Native to North America, although they have spread around the world, especially to Western Europe to the east, and to Siberia, China and Japan in the west.

In this area of Southern Ontario, we see these Geese on the banks of rivers and streams, Golf courses, in farmers' fields and in city parks, where there are so many of them that they are often considered a nuisance.

I had thought that telling everyone about the Canada Goose would be simple - but, since I started researching the information, I have realized that there is more than meets the eye about this Goose!

Did you know that there are seven Sub-species of Canada Goose?

They are all similar to each other, but have small differences so that they are given specific names, such as

In addition to the seven sub-species named above, there is also the Cackling Goose (Branta hutchinsii), which has often been incorrectly named the Lesser or Small Canada Goose in North America, and which also belongs to the genus Branta.

It has, however, enough differences to entitle it to it's own Species and in 2004 it was officially separated from the Canada Goose and how has its own place in the taxonomic order.

The Canada Goose is a member of the genus Brantaand is specifically Branta canadensis and their species name, canadensis, is a Latin word meaning "of Canada".

To hear the call of the Canada Goose, click here

It is said that these birds mate for life, but I have heard that when one of the pair dies or is killed, the other bird will choose another mate the following year.

These birds often return to the same nesting spot, year after year, sometimes even to where they themselves were hatched!

The parent birds are very protective of their eggs and young, and guard them well against predators such as foxes and coyotes. 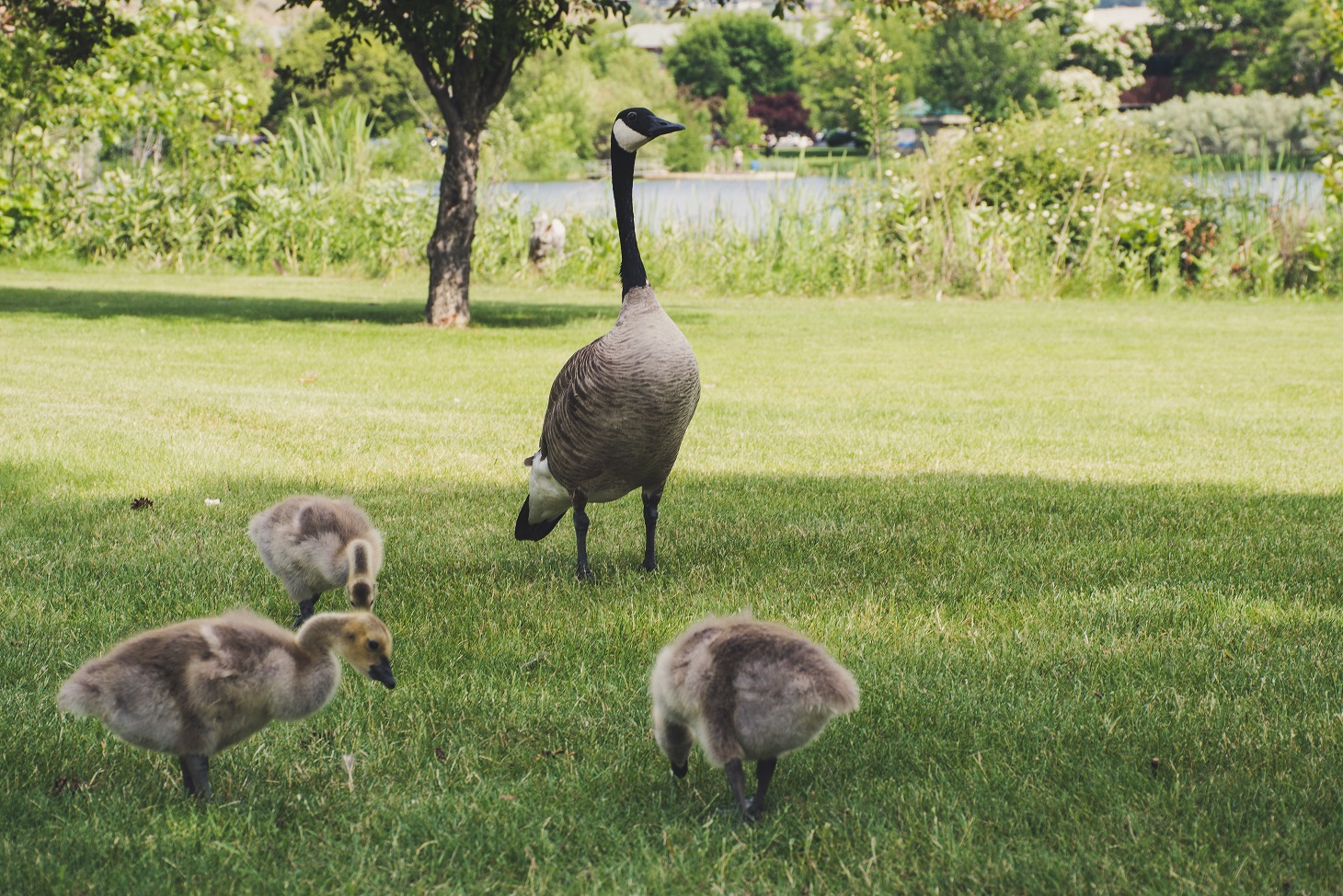 Here their mother takes the goslings for their dinner!

As they grow, the little goslings can be seen following their parents in a procession around their territory.

Birds in general, and Canada Geese in particular, form strong parent-child bonds and the goslings stay close to their parents. Problems can occur when parent birds are killed and their young are found and cared for by humans.

The little birds quickly adopt their human parents and imprint firmly on them, making it difficult to get them to become "wild" birds again and to be able to migrate with the rest of their species.

Fly Away Home: The Novelization and Story Behind the Film 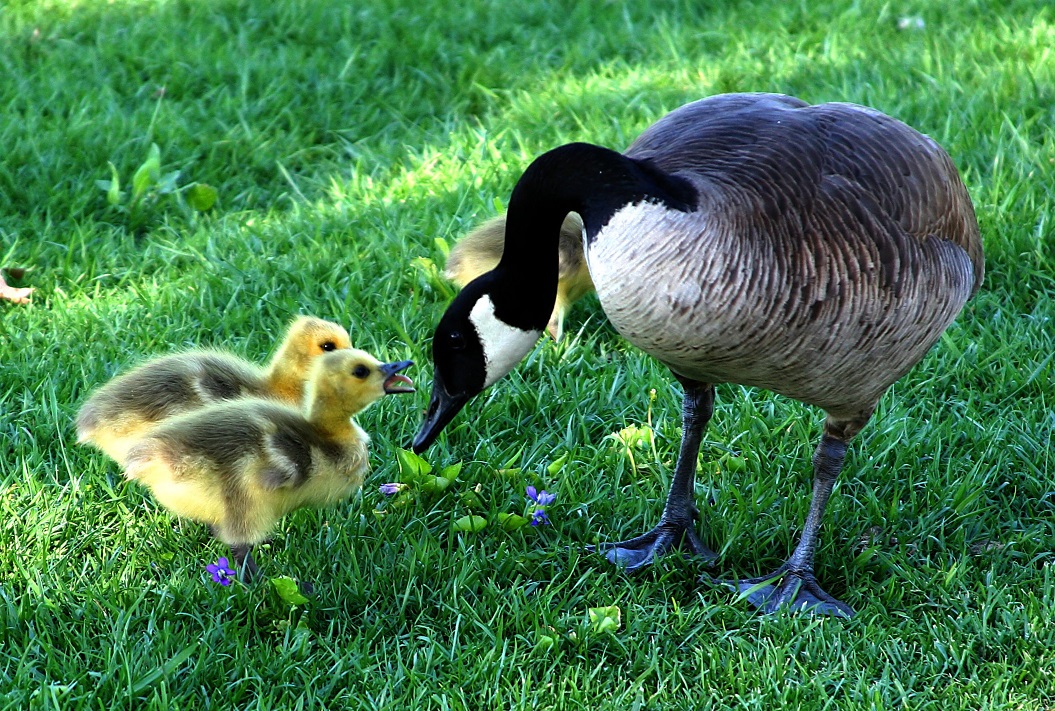 Just down the road from where we live there is a tiny island in the middle of a small pond in a farmer's field.

Each Spring, a pair of geese returns there to build their nest and lay their eggs. After incubating their eggs, the little goose family stays until the goslings are grown, and then they all fly south for the winter.

Spring is the time when it is prudent to avoid crossing paths with any Canada Geese that you come across when you're walking or jogging, because they can be incredibly angry if they think you are encroaching on their space or threatening their goslings. 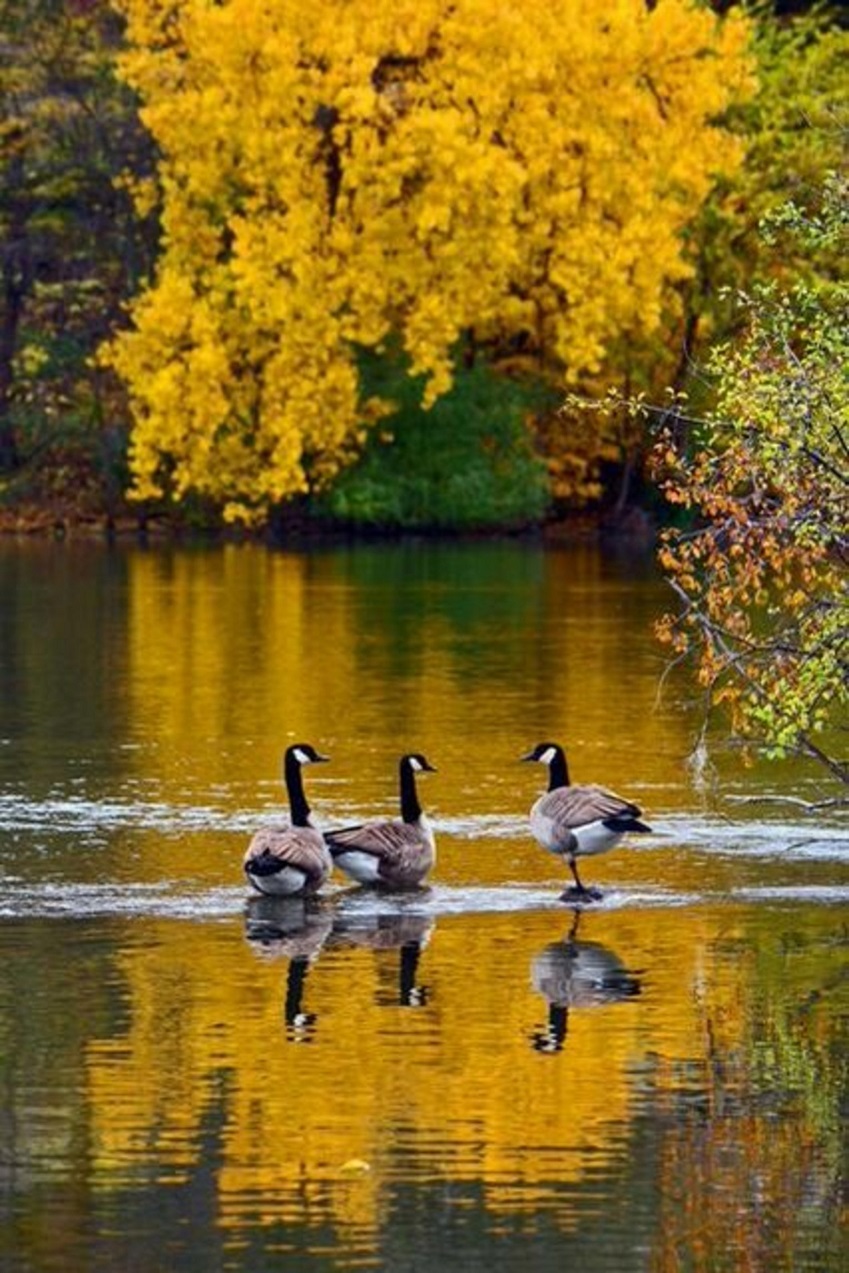 In the Autumn when the Geese start to migrate south for the winter and congregate in this area in their thousands, it is a spectacular sight to see them flying overhead in their typical "V" formation.

I often silently wish them well, and hope that they make it back here safely to delight us once more in their Southern Ontario breeding grounds.

My son-in-law David, (the intrepid hunter) assures me that the Canada Goose is not an endangered species, and he sometimes brings a plate of delicious roast goose to our monthly Family Dinners.

We can all enjoy our meal knowing that they are plentiful and are thriving and breeding well in all of Southern Ontario! 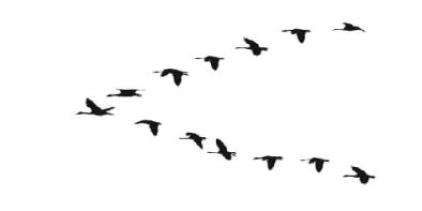 Game Bird Hunter Web Site
Lots of information about the Goose and other Game Birds, where there are comprehensive reviews on their habitats and habits. Other topics include firearms and gun dogs etc, all the information you require to enhance your next hunting experience

Canadian Geese - Hinterland Who's Who
Canadian source of lots of information on this Goose, "les bernaches du Canada"