In Canada, one the most distinctly plumed red birds is the Cardinal.

Of all the birds in Ontario, this brilliantly coloured bird is so spectacular that it is almost unmistakable.

This is one of our non-migratory species so it is around the bird-feeders all year long, and shows up so well against the snow, in the winter time. 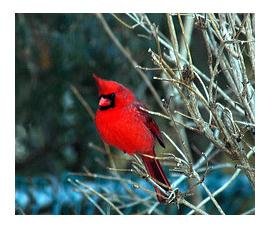 This male has feathers of an almost unbelievable brilliance which he is showing off so well in this picture.

To view a charming short YouTube video of a male Cardinal

These shy birds are found in and around woodland, brushy swamps, gardens and hedgerows, but they do not like thickly forested areas.

They can be found across the eastern USA, from the southern parts of Canada, south to the Gulf Coast and west to Arizona and parts of Southern California. 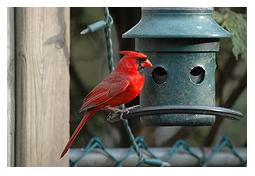 This male at the feeder looks expectantly for food!

These birds seem to be currently extending their territory Northward, deeper into Canada.

The Cardinal's range has actually expanded dramatically since 1886, when it was hardly ever seen north of the Ohio River.

Did you ever wonder how they got their name? Well, they were named after the Roman Catholic Cardinal's red robes.

These lovely birds average 15 - 16 cm in length and are easy to spot, as the males are a brilliant red colour with a crest and black around their beak. 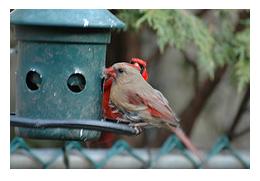 The crest is raised at the first sign of danger.

In this picture you can see that the female in the foreground, has more of an olive-brown body with a touch of red on her crest, wings and tail.

Juveniles have a brown body, a black bill and no black on the facial area.

Cardinals are territorial birds and easily become one of the dominant feeders at the bird feeder.

I have seen many occasions in my own garden when even the sight of their own reflection can trigger a fight!

One male that frequents our garden, spent the whole of one Spring attacking himself in the side mirror of one of our cars - he was quite determined that the other bird was not going to get the better of him! 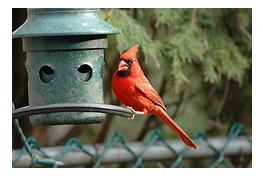 These birds search from the ground up for seeds, fruits, and berries of several species of plants, as well as insects, during breeding season.

They do like sunflower seeds when friendly humans supply them at bird-feeders.

Females usually lay 3 to 4 pale green eggs, spotted with red-brown, in a nest of woven twigs and plant fibres, which is mainly built by the female.

The nest is usually well hidden in thick brush between 3 and 10 feet from the ground.

Often a pair will lay two clutches of eggs each summer. Incubation takes around 12 to 13 days and the female incubates the eggs.

You can see more reports of wild bird sightings on our Facebook page
Discover Southern Ontario on Facebook! 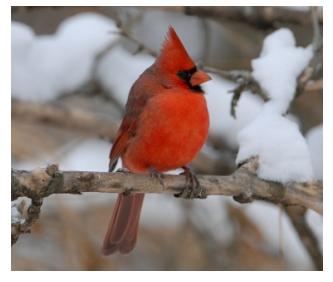 The Cardinal - info and pictures

A Field Guide to the Birds: Of Eastern and Central North America (Peterson Field Guides)

Do you see Cardinals in your area?

Do you have a report or pictures of Cardinals? We would love to see them!

The very first time I saw a Cardinal was back in 1977 when I first arrived in Canada after emigrating from England. It was the first winter I had spent …

Female Cardinal sent in by Alex Strong - isn't she beautiful!

I have had this male Cardinal for two months now hit my bedroom window from about 7 a.m. till dusk. I was told he saw himself and was chasing himself …

With the window open a crack just after New Year, I heard the tell-tale chirp of a Cardinal. There was a bit of a winter storm brewing as I looked …

Cardinal Winter Visit Not rated yet
This male Cardinal comes around in the winter. This little fellow visits me every once in a while. Thank you for sending us this picture of your …

Red Cardinal - what a beauty! Not rated yet
Spotted a red Cardinal at Lynde Shores Conservation Area.

Montreal Cardinal Not rated yet
My new bird feeder.

Cardinal visiting Kapuskasing in Northern Ontario Not rated yet
Pleasant surprise to have a beautiful Cardinal hanging around my yard for a couple of weeks around Easter. They are very seldom seen in our area. Mrs …

Many mornings they visit Not rated yet
I usually have a couple of Cardinals around my backyard, but lately there are more. Thanks for sending your picture - Cardinals are so beautiful! …

My picture is sad  Not rated yet
My son and his friend brought home a juvenile male they found on the side of the road dying :( He allowed me to stroke his beautiful crest while I …

Baby Cardinal preparing for first flight Not rated yet
June 24, 2015 A baby Cardinal sat in our lilac bush getting up the nerve to fly. Adorable! Thank you for sending this picture to us.

Male Cardinal downtown Toronto Not rated yet
I was walking home from work at dusk on March 12th, 2015 when I heard a bird singing at the top of its lungs. The male Cardinal was at the very top …

Young Lovers Not rated yet
Cardinals

Cardinal Not rated yet
Nature providing some colour to a snowy white scene, and two pretty Cardinals.

Cardinal  Not rated yet
A minus 16 C windchill does not keep our resident Cardinal from enjoying lunch.

Cardinals in Love Not rated yet
Male Cardinal feeding his mate.

Dinner date Not rated yet
This pair of Cardinals are daily visitors to my feeders, but I've never seen them at the same feeder at the same time. And they were willing to pose …