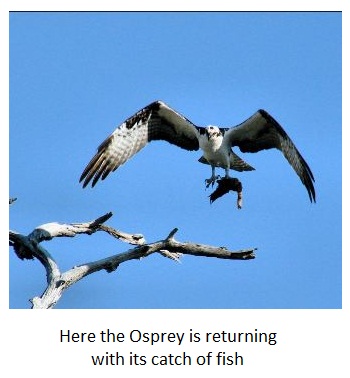 The Osprey is found throughout the world, and is often seen in Southern Ontario, especially during their fall migration when many pass near Hawk Cliff, south of St Thomas.

Sometimes known as the Fish Hawk, fish make up 99% of their diet and it is unique among raptors as it is the only North American bird whose diet is exclusively fish and its ability to dive into water to catch them.

Thankfully, their numbers have rebounded since DDT was banned and they are now at a healthy level.

In North America they breed from Alaska and Newfoundland in the north, to Florida and the Gulf states, and spend their winters in the southern USA, Cuba, Belize, Bolivia, Peru and Argentina.

The juvenile birds stay in their wintering grounds until spring of their second year, when they head north again.

Typically, males are smaller than their mates, and have a slimmer body and narrower wings. 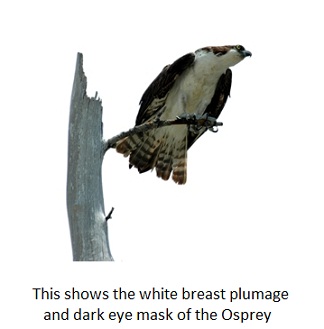 These birds typically weigh between 2 - 4 lbs and have a 4 - 6 ft wingspan. The underparts of the bird are brown and the plumage of the head and breast, white.

The most identifying mark is the dark mast across the eyes, which is very distinctive.

These raptors have barbed talons which allow them to hold on firmly to their prey - however, this sometimes causes problems for these birds.

If the fish they have caught is too heavy for them to lift out of the water, the unfortunate bird may drown because he is unable to release the heavy fish, because the barbed talons will not release it.

They do have an unusual adaptation to their talons which helps them firmly grasp wet and wriggling fish - they have a reversible outer toe which allows them to grasp their prey with two claws forward, and two backward, and this way, the bird can line up it's fish dinner, head-first.

They can live a long life typically living for between 15 and 20 years. 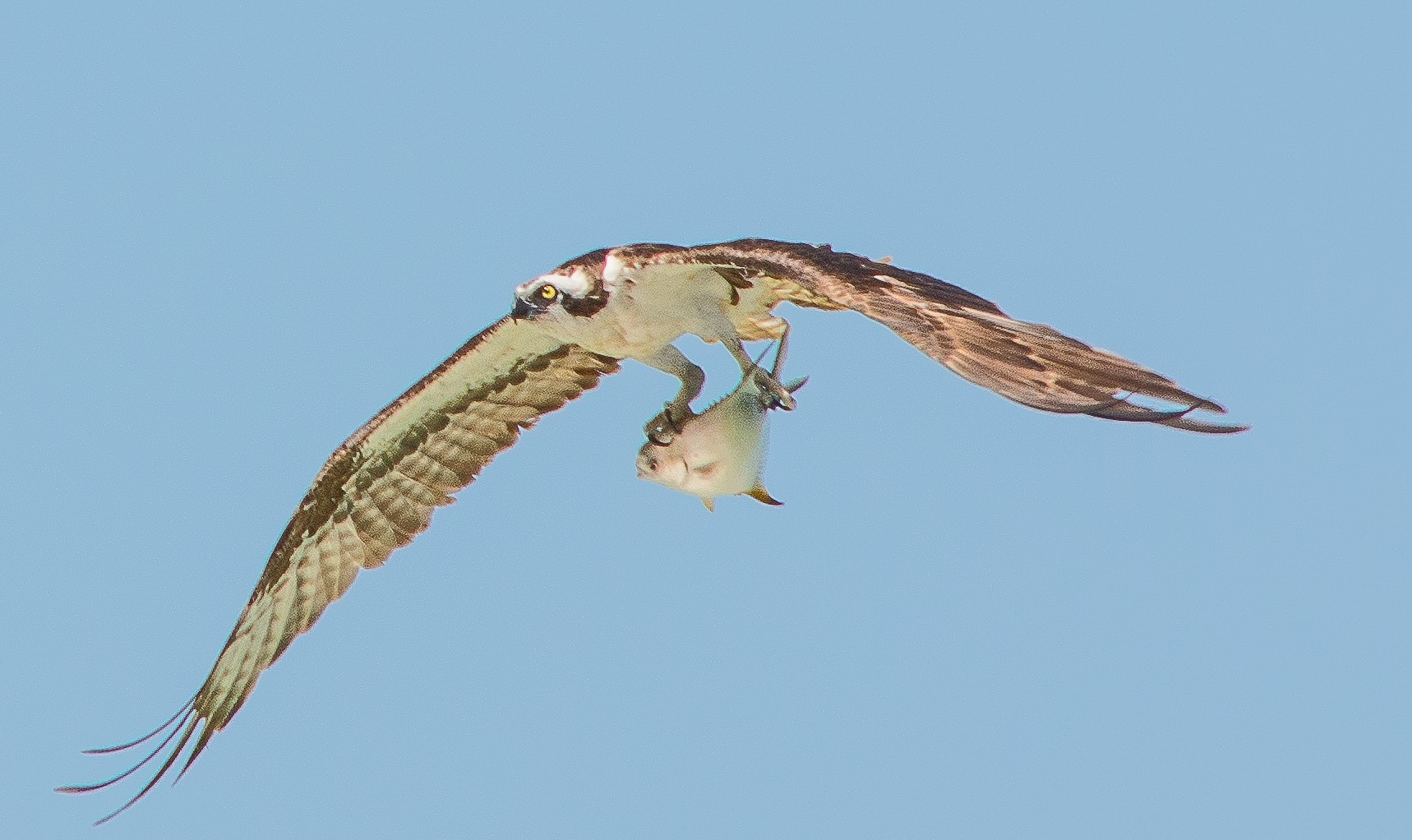 Just recently, an Osprey flew past the deck where we were sitting at home, with a fish in its talons, and I don't know what was stranger - that we were able to see the look of concentration on the face of the bird, or the open-mouthed look of surprise on the fish!

Cornell Lab of Ornithology - All about Birds - The Osprey

Thanks to Dreamstime for the use of the picture of girl in red shirt with books  4542997© Anatoly Tiplyashin| Dreamstime.com

Here is an interesting video of an Osprey fishing for its dinner!

Do you have a great story about Ospreys in your area?

Have you seen Ospreys in Southern Ontario? We'd love to hear about it!

I'm visiting London Ontario from the UK Ospreys are only slowly re-establishing themselves in the north of England and are still a rare sight. …

What is this large bird of prey?

It was sitting and having a snack on a light pole at Pine Glen park in Oakville, Ontario. It was 6:00 pm on July 22. I think that is an Osprey, …

Osprey On The Grand River In Brantford

A family of three Osprey on the Grand River in the area of Brantford, Ontario. We managed to capture a few shots with my son while walking the trails …

Osprey and Bald Eagles in London

We have been keeping an eye on the Bald Eagle Nest at Fanshawe, they are very active. A week or so ago we saw an Osprey fly overhead while at …

My family and I were driving home through Bradford when I spotted a very large bird on the top of a telephone pole. It looked black and white in colour. …

My two children, aged 13 and 7, asked me to find the name of a large bird they saw while at the local park. The biggest identifying mark they remembered …

Last night we spotted an Osprey behind our house. It perched in a tree for an hour and then flew away. Tonight the Osprey returned to the same tree …

Ospreys  Not rated yet
One of our readers wrote ... a pair of Ospreys flew over our house in Kilworth, too high and fast for photo evidence, but beautiful birds never the less. …

Osprey in Thorndale Not rated yet
This afternoon I was walking my dogs through our typical route which takes us past a large pond here in Wye Creek, Thorndale. The pond is home to many …

Observation of an osprey in flight Not rated yet
First of all I must, as a measure of a truthful disclosure to anyone who reads this, say that everything I am about to disclose is absolutely the truth. …

Osprey over Chippawa? Not rated yet
Over my house in Chippawa Wednesday evening. There were two of them, one higher than the other, slowly circled around for 20 minutes then joined together …

Osprey in Colchester Not rated yet
This is an osprey on top of cell tower in Colchester, Ontario. Great picture, thank you for sharing!

Osprey on the Maitland Not rated yet
There are 2 young (?) Osprey building a nest near my house. This one was giving me a look as it flew over me. Thank you for sending us …

Ospreys in London, Ontario  Not rated yet
Here are some clear and close-up pictures of the Osprey eating a fish, I hope you like them. This was September 23th 2014. Thank you Josh, for sending …

Ospreys In my backyard Not rated yet
I live in Bowmanville, Ontario, and last summer I had the pleasure to watch two Ospreys dive bomb our pond for fish, late afternoon on a summer day. …

Osprey on the golf course Not rated yet
Working on a golf course in King City just north of Newmarket, Ontario, I have witnessed an Osprey that frequents the ponds to hunt. I've seen …

Hawk fishing in Thames river in Springbank park Not rated yet
August 25th 2012, 2:30 pm - I took the kids down to the dam at Springbank Park, London, Ontario, because you can usually see Ducks and Geese down there. …

Beautiful Day and an Osprey Not rated yet
May 6th 2012, maybe 2pm at the Fanshawe Conservation area. We saw a bird flying pretty high circling the enclosed pond next to the boat launch. My …

Osprey Not rated yet
I recently sighted this Osprey with a freshly caught fish. Thank you for sending us this great picture of the Osprey - I will also post …

Osprey in St Thomas Not rated yet
April 22nd at around the noon hour, I and three others, spotted a very large Osprey flying over Kettle Creek. I found this site to identify the bird. …

The Osprey are back :) Not rated yet
Well I am happy to report that in Dufferin/Wellington County the mating pairs of Osprey have returned to their local nesting sites. What a wonderful … 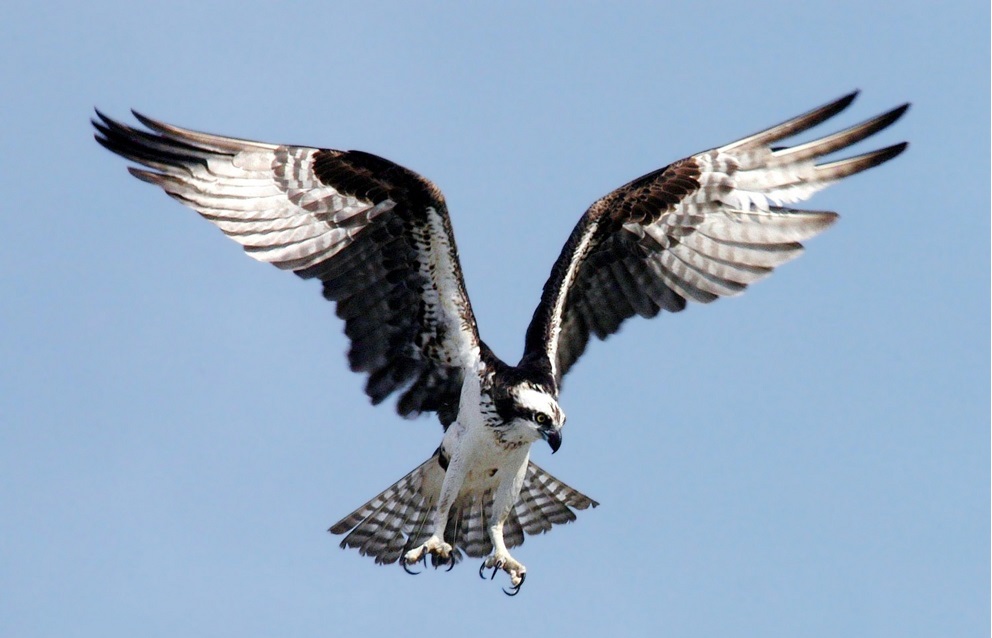 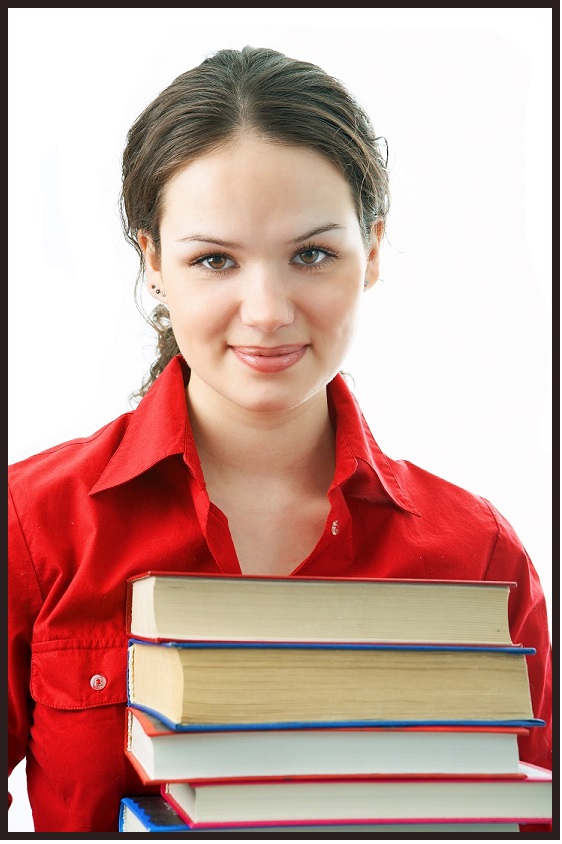