The Great Grey Owl is found across Canada, from the Pacific coast of  British Columbia to South Western Quebec, including southern Ontario. 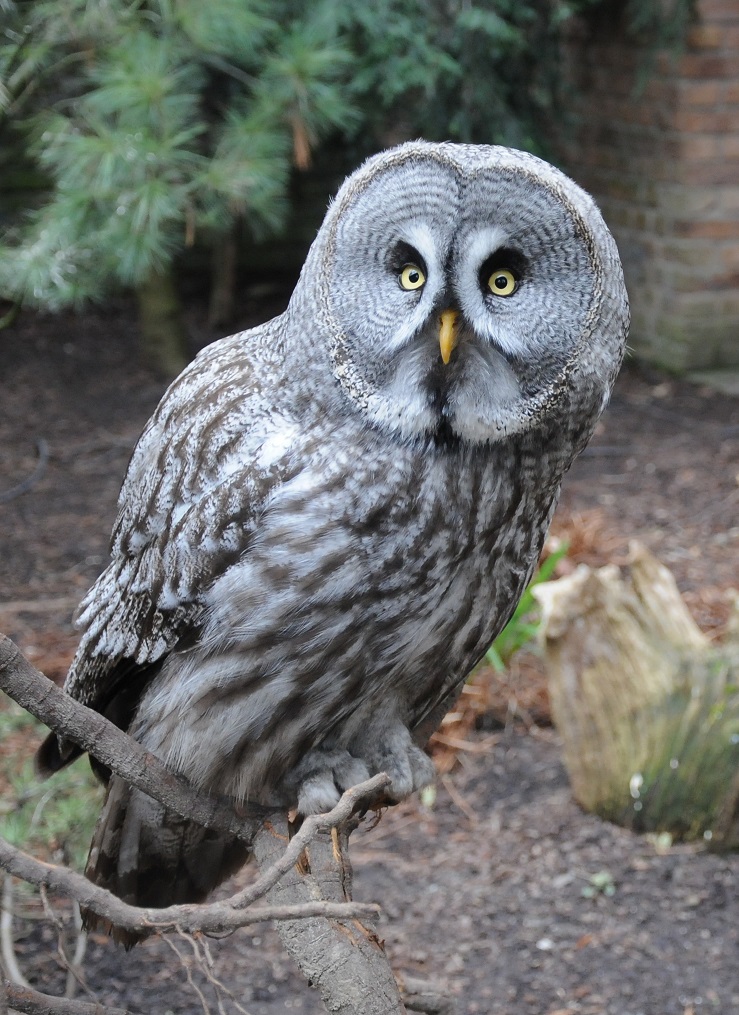 As with other Owls and some birds of prey, the female is larger than the male, with the average length of an adult female being 24 to 33" for females and males measuring on average 26".

In terms of body length, the Great Grey is thought to possibly be the largest owl in the world, although the Eurasian Eagle-Owl and the Blakiston's Fish Owl are believed to be heavier.

On average, the wingspan of a female is 4' 8" and a male's wingspan often measures an inch or two less.

As other owls do, the Great Grey Owl's deep call is a "Whooo, Whooo" usually when they are interacting with their young as at other times they are silent. 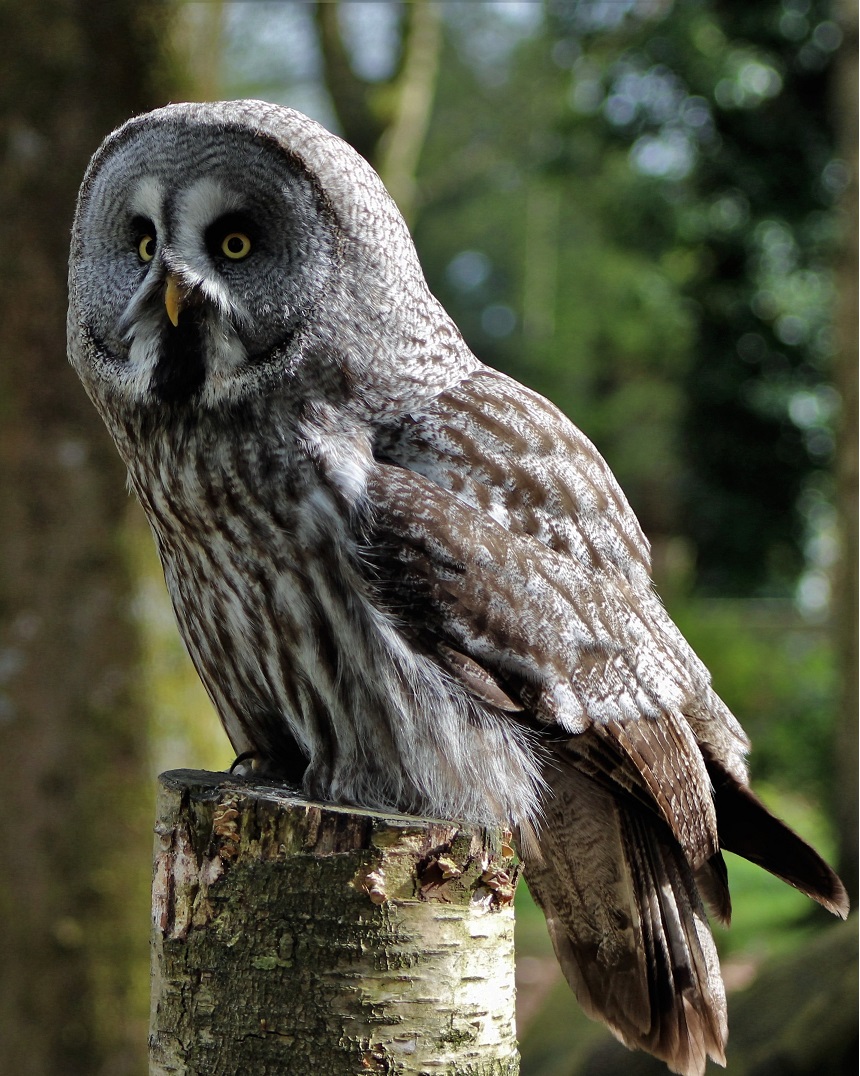 They lay their eggs and breed in coniferous forests and these birds are found in Ontario year-round, although they may move farther south during the winter months, to places where prey is more abundant, such as southern Ontario, New York state and the New England states.

Rather than building a nest, as most other birds do, these Owls tend to use the nests previously built by other raptors or cavities in large trees.

In Oregon, USA, these owls have been using, successfully, platforms erected by owl-loving citizens, for the purpose of nesting individuals who might otherwise not find a suitable place to lay their eggs.

The female normally lays four eggs and incubates them for four weeks, and the young owlets are fed by the father who hunts for small prey, but the mother stays on guard over the chicks.

By the end of the summer as winter begins, the young Owls are on their own and hunting for themselves.

Their prey is typically small mammals, such as mice, voles and squirrels. 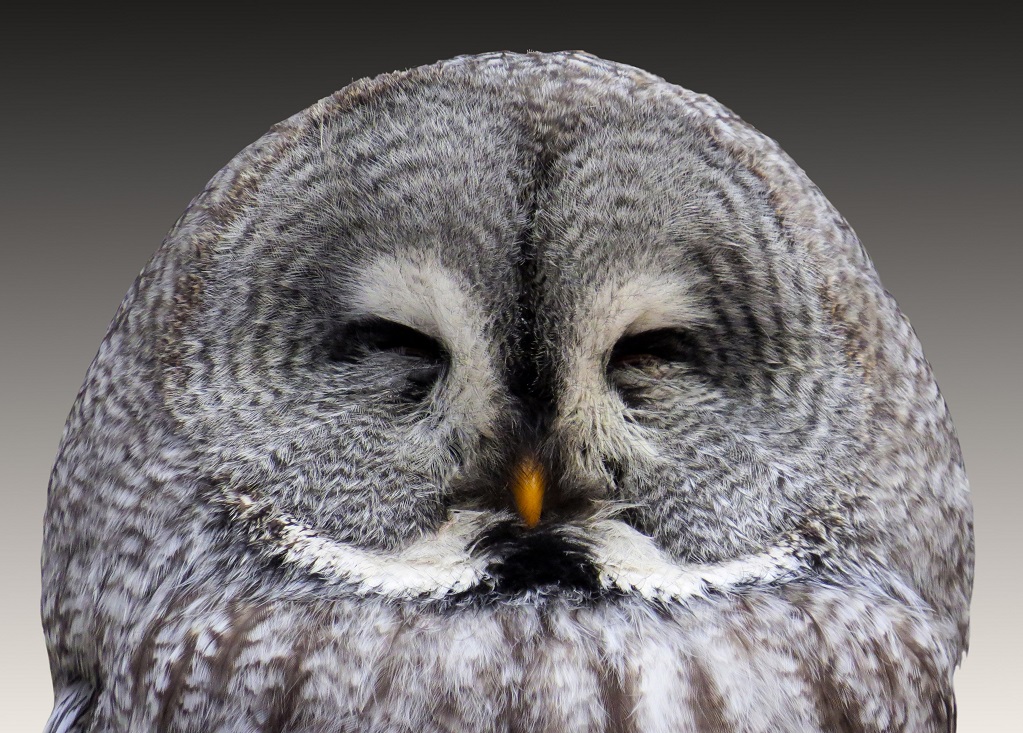 The harvesting of forests is a factor in the success or failure of the Great Grey Owl as this reduces their habitat and their supply of food, and they may disappear from areas where forests have been clear cut.

Other dangers also put these owls at risk, such as rodent poisons, being hit by vehicles, and increasingly, West Nile Virus also affects Great Greys.

Although they have few predators, bears have been observed killing young owls, as well as Great Horned Owls, but neither of these is a threat to adults.

The Great Grey Owl - All About Birds

Have you sighted a Great Grey Owl? If you have, let us know!

Do you have a report or pictures of a Great Grey Owl in Ontario? We would love to see them!

Yesterday while walking around my property in Pine Orchard, Whitchurch - Stouffville Ontario, I observed an owl which I believe is a Great Grey Owl. …

In the past few weeks there have been reports of a Great Grey Owl sighted in Kingsville , Ontario, and even CBC TV has sent their crew to see it! …

Great Grey Owl right in our back yard Not rated yet
Today is November 26 2022 and a beautiful Great Grey Owl sitting in our tree. Beautiful!

Owl Sighting in North Richmond Hill Not rated yet
This owl had hit the window over my front door and was perched on the roof overhang. I was concerned that it was injured and prepared to call on the OWL …