I have observed Bald Eagles in London, Ontario, and also near Port Burwell, close to Lake Erie, however, the use of the pesticide DDT and pollution by PCB's led to the near-extinction of these beautiful birds of prey, and in 1980 there were almost no chicks surviving in few remaining active nests along the Lake Erie shore in Southern Ontario.

Since then, thanks to protection and active conservation, the populations have started to increase, and more and more young Eaglets are surviving to continue to spread and successfully breed.

These birds were declared a Provincially Endangered Species in Ontario in 1973, and are still not common in this area.

The information below was submitted by one of our readers - Thanks David!

There were two Eagles there when I was taking these photographs, which were taken with a Canon 300D with a 70-200L lens. I think I'm gonna have to get a bigger lens!

Nevertheless, here are the pictures of one of these awesome birds. I plan on going out again to photograph, hopefully closer, these majestic Eagles.
NEW PICTURES 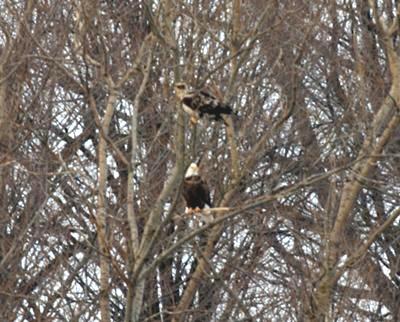